When Barack Obama won the presidency in November, 2008,  it felt as if a heavy cloud of sorrow, apprehension and anxiety would hang over our once great nation indefinitely. I recall experiencing the same sort of mournful, heavy-heartedness one undergoes upon the death of a loved one — made even more bitter after tireless efforts to get John McCain and Sarah Palin (ok, Palin, who made voting for McCain much more palatable) elected. 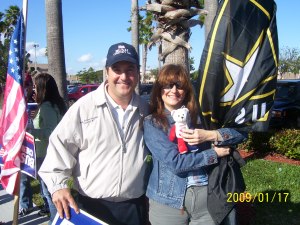 Posing with Adam Hasner at a rally in January, 2009.

As previously noted, I was a Tea Partier before it was cool. I was raised a conservative and have remained one my entire adult life. I love the United States of America with all my heart — the adopted homeland of my great-grandparents and grandparents, and the place where my father, son of humble immigrants, achieved his dream of becoming a surgeon. The place where my maternal grandfather graduated from Temple Pharmacy School in 1919 — during a time when such an accomplishment was nearly unheard of for immigrants — and opened up a corner drugstore that was a landmark  in his neighborhood for over 25 years. 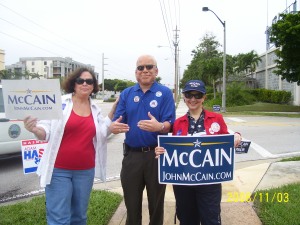 Giving it our best shot on Election Day, 2008. Sarah Palin would prove to be the bright light in an otherwise dismal campaign.

That was the America I was raised to treasure, appreciate and defend through grassroots activism. For as long as I can remember, my parents were always  involved in the political process at all levels — local, state and national. I knew what I believed and why. Had I been old enough, my first presidential vote would’ve been for Ronald Reagan, but alas, I missed the opportunity to send him back for a second term in 1984 by several months.

But I remember well his sunny optimism, his love of country and his stalwart, principled leadership. Thanks to his indefatigable efforts, the scourge of communism at last crumbled, freeing Eastern Europe, East Germany and the former Soviet Union.

Yet years later, politicians who abandoned Reagan conservatism set our county on a course of reversal that ultimately led to the ascendancy of the most radical president in the history of the United States of America.

The mournful morning after November 4, 2008, when a crowd paraded in front of the White House brandishing  the unthinkable — the Hammer and Sickle flag — I remember crying uncontrollably on the phone with a dear friend and fellow patriot, wondering what would happen next. What was to become of the land of opportunity that had drawn untold numbers to its shores, including my own amazing family? Was the American Dream really over?

The inaugural Fort Lauderdale Tea Party, which would become the longest running weekly event of its kind in the USA.

My  answer came a few months later, when something amazing happened. Ordinary Americans decided they weren’t going to go gently into socialism and tyranny. So they rose up in remarkable numbers to defend their freedom, even in the bluest of places. From South Florida to Seattle, they protested on street corners and town hall meetings, threw their support behind stalwart conservative candidates, organized on social media sites like Facebook and Twitter, and vowed to do everything within their power to take their country back.

A bright light began to pierce the darkness.

With "Too Tall Dan", a South Florida patriot friend, on the corner of US 1 and Oakland Park Blvd. in Fort Lauderdale.

Tea Party Fort Lauderdale, the longest-running Tea Party in America, formed in February of 2009 — founded by Danita Kilcullen and Jack Gillies — and is still  going strong, week after week. Every Saturday, they gather on the corner of US 1 and Oakland Park Blvd. in Fort Lauderdale — with plans to step it up even more in the wake of last night’s amazing election results. Over the past 20+ months, they’ve grown into a force to be reckoned with, as has Karen Hoffman’s South Florida-based DC Works for US.  A tireless grassroots activist, Hoffman is one of the most dedicated, genuine people I know. 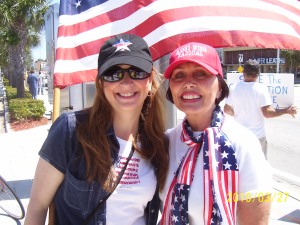 Then there are my dear friends and passionate defenders of freedom, Ellen, Kathy, Jessica, Christina, Victoria — and so many others who’ve kept me strong, determined and resolute throughout the first major battle of a long, protracted war. Getting to know these fine human beings has been an incredible blessing.

And to all of my Facebook and Twitter friends whom I only know through the blessings of modern technology, thank you for being a welcome source of strength and resolve in a very trying period in history. Along with local friends and my family, you’ve managed to keep me sane through the radical madness that defines Obama’s presidency.

Last night was the culmination of a hard-fought, principled fight, and the celebration was sweet. But as Florida’s new  governor-elect likes to say, “It’s time to get to work!”

Sorry the audio has been disabled by You Tube. There were great country songs blaring at the Scott/Carroll rally the other day.

For today though, I think I’ll bask in the glory of victory. After hours spent precinct walking, robo-calling, sign-waving, poll watching and otherwise doing everything in my power to help elect good, strong conservative patriots, I don’t think it’s asking  too much.

Besides, I have some awesome videos I need to  post from the Allen West victory part last night at the Boca Marriott! As the Sun-Sentinel said, “in the end, it wasn’t even close”. Florida CD 22 “de-Kleined” in favor of our constitutional conservative war hero. 😉

And here’s the son of an exile, now Florida’s newest US Senator:

We’re taking it back, baby!